What do we mean when we say"RAPE CULTURE"? 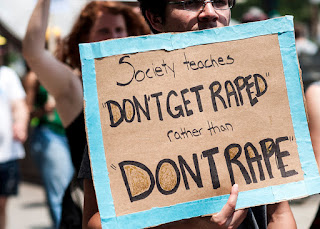 When we talk about rape culture, we’re talking about cultural practices that excuse or otherwise tolerate sexual violence. We’re talking about the way that we collectively think about rape. More often than not, it’s situations in which sexual assault, rape, and general violence are ignored, trivialized, normalized, or made into jokes.
And this happens a lot.
All the time.
Every day.


And it’s dangerous in that it is counterproductive to eliminating sexual violence from society. So what, exactly, does rape culture look like? How does it present itself? Well, to see what I’m referring to, take a look at the examples below. Because if we don’t understand the meaning behind the concept of rape culture, or if we have a skewed interpretation of the meaning in our minds, we may find it easy to deny its existence. And you may think that some of these examples are isolated, one-off situations. But in reality, they’re part of a larger societal trend.
That is rape culture.
Rape Culture Is…
1. A university in Canada that allows the following student orientation chant: “Y is for your sister. O is for oh-so-tight. U is for underage. N is for no consent. G is for grab that ass.”
2. Pop music that tells women “you know you want it” because of these “blurred lines” (of consent).
3. A judge who sentenced only 30 days in jail to a 50-year-old man who raped a 14-year-old girl (who later committed suicide), and defended that the girl was “older than her chronological age.”
4. Mothers who blame girls for posting sexy selfies and leading their sons into sin, instead of talking with their sons about their responsibility for their own sexual expression.
5. Photo memes like this: 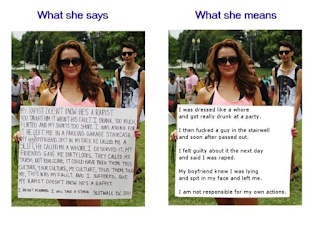 6. Supporting athletes who are charged with rape and calling their victims career-destroyers.
7. Companies that create decals of a woman bound and gagged in order to “promote their business.”
8. People who believe that girls “allow themselves to be raped.”
9. Journalists who substitute the word “sex” for “rape” – as if they’re the same thing.
10. Politicians distinguishing “legitimate rape” and stating that rape is “something that God intended to happen,” among other horrendous claims.
11. Calling college students who have the courage to report their rapes liars.
12. The ubiquity of street harassment – and how victims are told that they’re “overreacting” when they call it out.
13. Victims not being taken seriously when they report rapes to their university campuses.
14. Rape jokes – and people who defend them.
15. Sexual assault prevention education programs that focus on women being told to take measures to prevent rape instead of men being told not to rape.
16. The victimization of hospital patients, especially people with mental health issues and the elderly,  by the very people who are there to protect them.
17. Reddit threads with titles like “You just have to make sure she’s dead” when linking to the story of a 13-year-old girl in Pakistan being raped and buried alive.
18. Reddit threads dedicated to men causing women pain during sex (I’m not going to give the thread credence by linking to it).
19. Twitter hashtags that support accused rapists and blame victims.
20. Publicly defending celebrities accused of rape just because they’re celebrities and ignoring or denouncing what the victim has to say.
21. Assuming that false reporting for sexual assault cases are the norm, when in reality, they’re only 2-8%, which is on par with grand theft auto.
22. Only 3% of rapists ever serving a day in jail.
23. Women feeling less safe walking the streets at night than men do.
24. 1-in-5 women and 1-in-71 men having reported experiencing rape.
25. The fact that we have to condition ourselves not to use violent language in our everyday conversations.
And the list could go on.
Because examples of rape culture are all around us. They permeate our society at individual, one-on-one levels, as well as in institutionalized, structured ways. That is, after all, exactly how oppression works.
I hope that after reading through the above examples, you have a clearer understanding of what is meant by the phrase “rape culture.” Moreover, I hope that you are more likely to believe in its existence – and to want to fight for its eradication.
Because now that you know what it is, you can work to find ways to prevent it.
What are some other examples of rape culture? Leave them in the comments.
culled