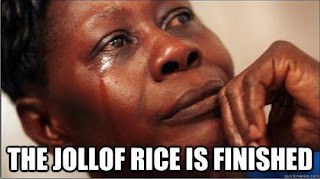 Last time I attended a burial, I was mourning, not the dead, but the senseless wastefulness I witnessed.

The crowd of villagers, the different dancing troupes, the live band groups, the priests and pastors with their fancy white gowns... Festivity was in the air.

Nope, this wasn't the burial of a wealthy man. He was just an ordinary villager who couldn't send any of his kids to school, living in a very old dilapidating structure of a house.


As soon as the burial rites were done and the grave was closed up, the festival began. Plates of rice started flying everywhere. The Ogene singers and church live band started a "madness competition", with the noise of their music renting the air. The cultural troupe was dancing in front of their own 'cooler' of rice. A commotion erupted in one of the canopies. They were demanding egusi soup but ogbono soup was given to them. They will not take it.

The in-laws were shouting. Where is there own pounded yam? No, they will not take Semo, it must be pounded yam, according to tradition. Nobody should tamper with their meats and drinks.

The priests and pastors were under their own canopy. They don't eat like mere mortals. Rice and stew with salad and all manner of condiments I don't know. Huge chunk of chickens, wine and juice..... It was heavenly!!

Then Umuada, those noisy village women were bickering in their own corner. There should be a mixture of egusi and ogbono soup for them. It is their right! They will not take only egusi. BTW, anybody who has not paid burial levy should not touch the food ooo. Where is mama Uche? Guard that pot of meat!

It was all madness! A typical Igbo burial.

Chidera said "Oh that... Where I'm from, Nnewi to be precise, at least three cows must be killed. They killed six for my grandmother. And you would come to find out that people don't even care about the person who died, but the amount of ofe onugbu that was available. Which explains why you'd hear the villagers say something like _"imakwa na burial ndi be nwosu, ofe egusi ahu ha siri, na maggi na ogiri atu hia"  "Do you know that the egusi soup they shared in nwosu's burial did not have enough maggi and ogili "  Which leaves you shocked, because why people were actually mourning. Someone was busy checking out the soup that was served.smh"

Fairygodmother said" I laugh at them when my parents grow old and die. They will see things. Unless my elder brother decides to be stupid and throw away money. If not, hahahah (evil laughter) they will be highly surprised. I am ready to go and bury the dead in a public cemetery. Mstcheew.
Daniel said "I can actually relate to this as a typical igbo guy! . . .you cannot serve us rice when it ought to be ukazi with achara. Traditionally, it is a taboo. Hahahahahaha.. Hahaha amadioha loves ukazi soup and schnapps"

And the most hilarious one was  "Even the dead can feel the shame, well I have decided never to die "