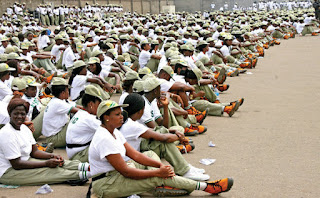 Prior to when I received my call-up number, I was told Lagos NYSC camp, Abuja NYSC camp and Port Harcourt NYSC camp are more exciting than others so I made plans to influence my posting to one of them.
I typed ‘NYSC Lagos Camp’ on Google search bar and an image of a shirtless Iyanya appeared among female corp members.
Damn!
This might be my only opportunity to kukere Iyanya six packs, I thought.
Lagos camp was it!
That evening, I asked my parents for
30,000 to influence my posting. What followed next was a three hour sermon on “The implications of altering your destiny”


My parents were not going to give me the money and their decision was final.
I didn’t let that perturb me.
The next day, I cleared my account for the NYSC runs boy.
Finally, call-up letters were out.
While my friends scrambled to school to know their fate, I didn’t bother. As long as I was concerned, my name was among those posted to Lagos.
Two days before camp was due to open, my proud self bounced to school to get my Lagos callup letter. The last thing I remembered was seeing my name along with the state code IM.
I had been duped!

FIRST DAY IN CAMP
Two days later, I stood miserably at the gate of the camp.
I met some soldiers searching a long queue of prospective corp members.
When it got to my turn, they emptied my box and began making jest of me when they found 3 tins of cereals.
Luckily for me, one NYSC official took pity on me and assisted me with the registration process. It would be an insult to titus sardine If I say 46 human beings were bundled like sardines into one kirikiri looking room because nowadays, there is only one and a half fish relaxing comfortably in a titus tin.
We had no toilet. They didn’t care whether we gave a shit or not. All puns intended.
No provision was made for a bathroom too so we had to wake up as early as 3:30am to shower on an open field.
THE CLIQUES
The first thing I noticed were the foreign students clique with real and fake accents.
Even graduates of University of Ghana had accents too.
Houegbe North American University graduates had American accents too. The funniest of them all was one girl from Enugu State University of Technology.
In a bid to be among, she had what some group of boys called a Chinese accent.
Who knows, she must have acquired it the day she had dinner at a Chinese restaurant.

THE PARADE
The first day I attended the parade, I heard a soldier telling some corp members.
“Bounce that leg harder! No be your leg again! Na the Federal Government get am”
Out of fear, I ran inside the bush to hide but unfortunately for me, one soldier caught me and she made me frog jump for twenty minutes. When I was done, I became temporarily crippled. I borrowed a walking stick from one fake crippled (we had a lot of them in our camp) and staggered to join the Orientation Broadcasting Service.
On getting there, I was rejected by the head of OBS because I refused to present news in a fake accent.
Where the hell was I suppose to download one from?

MY PLATOON
We celebrities (yes, I’m one) in Camp tried to live a lowkey life but you know what they say about supernovas? LOL
In my case, my oversized shoes and uniform stood me out!
My feet is size 36 but I was given size 44 boots so I had to double shoe pads and I also used a rope to bound my feet to my shoes.
The same went for my khaki. The tailors just couldn’t get it right even after using one trouser leg to create a new trouser for me. I ended up doubling belts.
Platoon Officer wanted me to represent the platoon in Miss Indomie noodles beauty pageantry but I refused with reasons that I prefer Dangote noodles.
She got irked and threatened to post me to some place where I won’t see tarred road for a year.

CAMP KITCHEN
I sneaked into the kitchen one day and found a huge pot of beans swimming in a mixture of oil and water. I peeked at the bucket of watery tea and it looked like the milk they put was keeping malice with the hot water. Literally, they both refused to ‘mingle’.
I instantly became a food rights activists with talks of
“How can they serve us this thing when we have no toilets?”
”Do they realise some of us are first class graduates?”
There was wastage of food that evening as most people rejected the beans.
That night, our coordinator assembled every corp member and asked why three quarters of us didn’t utilize our meal ticket.
She pleaded for answers.
I and some other busybodies raised our hands and complained campfood is shitty.
To cut the long story short, we were made to sit in the open field till 1am for that statement.

MAMI MARKET
Mami market was my place of refuge. It solved my problem of food and fun. Thanks to the cool guys I made friends with, they all took turns to pick my bills. That went on until one particular girl towering above 6ft pulled me aside and warned me to stay away from her camp boyfriend or …  (Reason I left camp as Naijasinglegirl again)

REDEPLOYMENT
Many corp members applied for deployment to different states on health grounds. So many of them had come prepared with letters from hospitals, faking different sicknesses. They were desperate!
One particular guy lied early madness runs in his family. Say what?
I also wanted to get a fake health report but my father warned me against it.
The only real illness I suffered from was sleeping sickness. (I could kill for an extra five minutes of sleep every night)

LIFE OUTSIDE CAMP
Last day of camp, we were issued our posting letters. My place of primary assignment was one bush secondary school in Owerri. My greatest challenge was where to get hotel accomodation for two nights during our PPA registration process. Almost everyone in camp were plagued with the same problem.
I eventually found one church family house. There, I was handed a list of rules and regulations.
1. Only English language and speaking in tongues allowed.
2. No sleeveless shirt or trousers.
3. No smiling with boys anyhow.
4. Compulsory 5am devotion and 9pm devotion.
5. You must be fully ‘kitted’ on your way to the bathroom. No towels allowed.
Basically, I went from one regimented place to another.
No Etisalat, MTN and Airtel service too. Basically, only Glo ruled. (Globacom you owe me for this advert. lol)
After my first night there, I couldn’t take it anymore. Someone took me to a cheap hotel to stay.
On getting to my PPA, it was the ugliest place I had ever been. I begged the school authorities to reject me. My pleas fell on deaf ears.
I was allocated to the administration unit of the school as an office assistant to some female teachers.
That’s how I spent my NYSC days assisting some Igbo women unwrap their okpa and stir their abacha ncha.

Congratulations to everyone going to camp this batch. NYSC was one of the most interesting year of my life.  I have a lot of experiences to share and maybe I can find time to write about it weekly. Yes to more posts?
Source: NaijaSingleGirl
Your comments are like butter to my bread.. Pleeeaaassssseeee don't starve me!!! Follow us on twiter HERE like our page on facebook HERE  follow us on instagram HERE. Share this post to your friends, families.enemies infact everyone. FMB loves you.