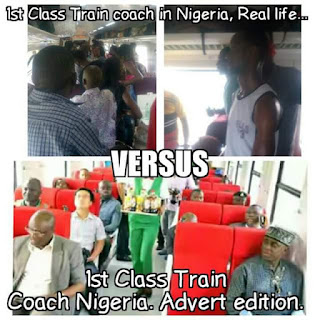 I bought a first class ticket to join a train from Port Harcourt to Kano (though I was to stop at Enugu). You can imagine the romantic notions I had about how the trip would go; how I would look out of the window in slow motion while having some melancholic background music to reminisce with on anything; while my imaginary long, jet black, silky hair would fly around in a carefree manner. Most of what I had thought about traveling by train was informed by European subway tubes! I know, right? I gave too much credit to a government run commercial system in Nigeria. I shall now attempt to share my experience as briefly as possible.


First, I arrived at the station at about 5:49 am. The girl who sold me the ticket made it feel like coming by 6am was equal to missing the train. Well I did my best to be early yet we only boarded the train at 6:49 am. Like most Nigerian institutions, they failed to keep to time. I was like the 5th person to get into the 1st class coach. I immediately noticed the odor, it wasn't so strong but it was well represented among the gases in that coach.

At first, I thought that those of us in the first class coach had hit jackpot. It was properly lighted and the air conditioning system was up. We sat, took pictures and generally relaxed. Things began to go bad as we made a stop at Imo River.

At first, the ride was so cool I even had enough time to fantasize about being an action hero in a movie. I imagined one grumpy, tall guy in a red baseball cap as a terrorist whom I would fight on top the moving train, save the passengers and ride into the sunset. Soon enough, our coach was jammed with passengers with both 2nd class and 1st class tickets forcing their way in; so jammed and hot, I was cured of my action hero day dream almost immediately (even James Bond would fail his mission, if it was to be carried out in that coach. How can you shoot when your hand is squeezed to your sides by standing committee?) We were told that the 2nd class coaches had reached their max, we had to put up with the new passengers. Things got even worse at Aba terminal.


There seemed to exist little or no synergy between stations or their activities. Why would the train be filled and yet tickets would still be sold at successive stations. So we would arrive to large crowds of passengers waiting for an already filled train with valid tickets. If the train is filled on booking at PH, we shouldn't see large crowds of people with ticket waiting for us at successive station.

The Railway Corporation also appeared grossly under-staffed. We had just one young boy trying to control our coach of over 300, sweating, angry and volatile passengers. There were several near clashes or mob incidents as both  tempers and temperatures rose.

Now, something really unhealthy was that, the first class coach was built in such a way it has very little ventilation because it is supposed to always be air-conditioned. But, as a matter of tradition, the power generator always breaks down at some point (or so claimed the staff). Then we had to all squeeze into this very hot coach. The little vent present, can't even be opened as dust and soot from burning bushes flow in and choke the passengers. It was hot, we're locked in and tightly packed. That's the picture. 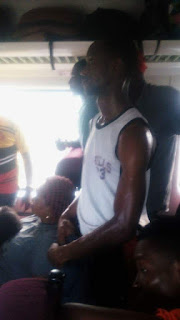 Asides this, the management of haulage was very unprofessional and undependable. A passenger who sat in front of me, had paid to transport 10,000 fingerlings. He had the fishes in perforated jerry cans with water at the heavy luggage section and would come down at every stop to check it and change water as necessary. But in between Aba and the next stop. He had lost his fishes- they died. Some of the new passengers had had their luggage thrown over the vent of his cans and killed his fishes.

Wouldn't it have been more solid if inventory of luggage was categorized according to such sensitivity? Wouldn't it have been better if an adequate number of staff had been employed so that some could be fully assigned to handle luggage so no one gets a damaged good after paying for the service?

If there was any asthmatic person in that coach, an attack would have been certain. I am not sure there's any medical help on board, not even a first aid box. I may be wrong on that, though. I hope. The children were the worse hit. So many of them were crying almost constantly.

Because of the minimal coordination at each stop, there was much delay before the journey would commence. We left Port Harcourt at about 7:11 am and arrived Enugu at 6:55pm. Almost 12 hours for a journey of roughly 5hours. If the departures and arrivals at successive terminals are overseen from an overall monitoring center with sub-monitoring centers, the delays could be significantly cut out.

People of Nigeria, the railway system is a viable transport option but the corporation or the ministry of transport, in following status quo will just kill it. The overload of people and luggage will exert faster wear on the trains.

1. Get more staff to man the coaches (to maintain order in the trains) and to handle bookings at the stations.

2. Restructure the system by creating a functional central control station to collate, process and manage trips, oversee the system. This will end the current kamikaze approach of transportation; come one, come all!

3. Draw up and enforce policies to ensure weight capacity is not exceeded so outrageously.

4. Carve out a special unit from the corporation to receive, process and handle passengers' luggage in a more professional manner.

6. Better the conditions of the first class coaches. When we had to open the few available small vents, we coughed and choked from dust and soot. I'm lamenting but I was in first class. Stretch that to appreciate how bad second class coaches must have been.

7. Re-orientation of the security personnel on board. We're customers, they should stop shouting, pushing and hitting people at the slightest offence like we came to write JAMB. Let's show our civility by how well we treat even the bad eggs among us.

8. And change the embarrassing ticket. It won't be bad if the tickets read the actual amount they cost instead of N13.45.