the MAD WOMAN that lived on my street. 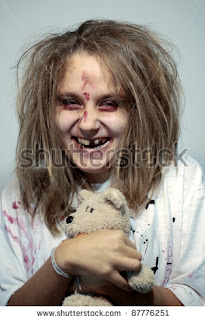 I do not know the source of her insanity but she lived on my street, made us laugh and puts to bed every year. Sometimes she tells us of her sexcapades and injustice done to her by men. She'd say " sister osas do u know one man had sex with me today around powerline and after that he shaved my pubic hair and took it with him?" And I'm like WTF???


No one knew the father of her kids and we bet she didn't but you dare not refuse her anything if she comes begging. Often you hear her saying " abeg datch me N20 and the neighbours will sometimes reply " oya comot for here, I go beat u o" and when they finally changed their mind she refuses to collect the money with a sarcastic reply " stingy goat".

Two months ago, my family was jolted awake with a large thud on our door. My neighbour had come to ask my dad the phone number of Ms X's (the mad woman) father. They needed him urgently cos she died that morning. Was she sick? No. Was she poisoned? No. Accident? No.

Ms. X was dating an insane man too.. But let's just say this one level of craze no too high.. But him head dey do skoin skoin...let me tell you about Mr. Y. This fateful wednesday evening I stepped out of the house as I was on my way to bible study and I met Ms X and Mr Y having a hot kissing and smooching section in front of my house with neighbours and passer by shouting and cheering. (Twas reli funny tho) and that's all I know about him.

Ms X had gone to spend the nite with bae and they had a fight that night he beat her up and she gave up the Ghost. I forgot to add she was even pregnant. No one knew what happened. Mr Y said he didn't touch her. But neighbours said her face was filled with smudges of blood. Did he hit her on the head? was she strangled? did he hit her on the tummy? What could have happened? I don't know and no one does.

One of my furious neighbours said " sue Mr Y and his family" and I'm like "seriously??? Sue a mad man??? As I lay awake reading for my exams her thought crossed my mind. She's might be insane but she knew the way to her house everyday and even if those kids will never know their real parents, but they had the " thought of a mom".