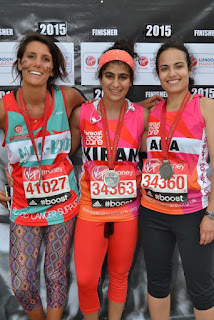 Its either I’m becoming too stereotyped or maybe some people have made a decision to remain crazy or just maybe I’m affected by staying indoors too often. So Kiran Gandhi ran a marathon in London while on her period and deliberately chose to not use a  sanitary pad/tampon because she wanted to end period-shaming. What is period-shaming, you may ask? I don’t know. I heard about it few days ago and its been an interesting read. Apparently, some women apart from me and my friends have been shamed for having periods.

According to Kiran Ghandi, “We’ve created a stigma around periods in which you can’t talk about them, and you have to clean them up and you have to pretend they don’t exist… And if you do choose to clean it up, that’s fine. Most women are completely comfortable wearing tampons. But in the moments where it’s not the best option for you, that should be my choice.” Again, this does not apply to me, but I won’t shut it down just because it does not apply to me. I don’t understand what she said about us having to clean it up though. What would be the alternative – walking around the street/work with blood-stained clothes?
This, falls into the category of stupid things we should not do. If indeed there is a period-shaming thing going on, how does running with your period-stained pants help anyone? Sure, it makes people talk about it, but not for the reason and not in the manner that you want them to. Period is blood. If you were bleeding from your nose, would you just casually stroll the streets like it’s not happening?

Again she said “"I have this vision that if men had their period, because we are in a male-privileging society, that rules would be written into the workplace, rules would be written into the social fabric that enable men to take a moment when they need to or enable people to talk about their periods openly," she said.” ( shebi you see they hafe brought the men factor into it again?) 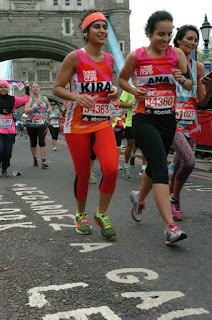 I think that wearing a pad/tampon while on your period is just being courteous and sensible. It’s right in there with taking showers, brushing your teeth, using deodorant, and wiping your ass after your defecate. While we’re on the subject of defecating, why don’t we all just start doing it outside, in our living rooms, and maybe even on our office desks? After all, defecating is natural, isn’t it? And it’s something that people can sometimes be shy about, so hey, why don’t we all defecate everywhere and stop poop-shaming?

She makes the point that “More than 40 million women in the U.S. live on the brink of poverty and cannot afford tampons, Gandhi wrote. A yearly supply of sanitary pads or tampons averages $70 a year, and they are not covered by food stamps. Furthermore, 66% of African girls don’t know anything about menstruation until they start, and only 12% of women in India use sanitary pads or tampons at all.” But she forgets to consider that the reason why these women are not using pads/tampons is because they cannot afford it or do not have access to it, not because they want to stop period-shaming.
Well, Kiran Ghandhi, your actions have proven that you are totally disconnected from the people you think you are standing up for. If you really do want to make a difference in the lives of these African and Indian women, then you can do any or all of the following:
Educate them on their periods, and
Send them pads and tampons. Because no one in their right mind wants to walk around with blood dripping out of them.

Ugh. I am utterly ashamed. Stop the madness. Jesus is coming back soon.