Whose Grandma is topless in times square? 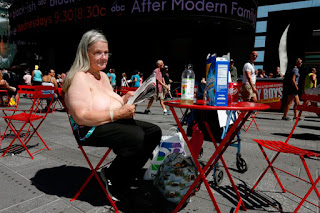 I keep wondering why anyone would want to pose with naked women. And why exactly should it be labeled sexist to not want them walking around publicly. The argument is that women have a right to do as they wish with their bodies, and I am all for that, but I am not for people doing that publicly. There is a reason why certain things are just naturally done privately. If we all go public with the things we do in private, there will be global chaos. Being naked is one of those things, unless you’re in a public place that is designed to celebrate nudity — like a strip club or a nude beach or your home. Times Square is none of these places

Now, here comes someone’s grandma deciding to start the topless movement by sitting topless in Times Square. By the way, look at the white guy in the background with the white tee. He looks like he’s trying to figure out what the heck is going on here. Claire Hogenauer says she’s been a feminist since the age of 12, which I respect her for because at the age of 12, I only cared about going to help out in my Dad’s shop after school. She is also a former criminal-defense lawyer, which I was honestly surprised by. For some reason, I thought no smart person would do this.

Whenever I read things like this, I always ask the same question: how does this advance the cause of women? How do topless women in Times Square help us gain more respect from men and the entire world? How does this help women get equal pay for equal work? How does this stop the gang rapes in India and the world? How does this stop the men in Nigeria from treating their wives like glorified maids? Does anyone ever do these things and go back to check the return on their investment? So you’re naked now, but will you go back 6 months later to see how many lives your nudity has positively affected?

I personally do not want to go through Times Square or any other public place and be accosted by naked women or men. And when I have children, I would especially not want to see that. I have never stepped a foot inside a strip club; I don’t say this to appear to be a good girl, but to make the point that if I cared to see naked people that badly, I would have tried at least once.

Some people are complaining about the perkiness – or lack of it – of Claire’s breasts, which to me is a complete distraction from the issue. The woman is 69; leave her breasts be. Would perky breasts have made a difference in deciding whether or not topless panhandlers should roam Times Square? By the way, why is this even considered a gender or sexist issue? Are there naked male panhandlers in Times Square that are not being talked about? This isn’t a rhetorical question; I’m asking because I don’t know.

Meanwhile, whose grandma is she though?