Old But Gold - Why Every Christian Should See War Room 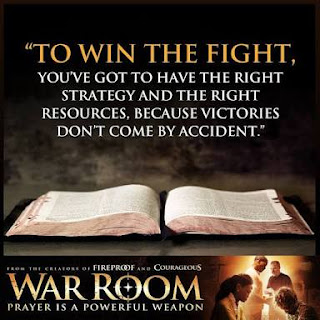 I am a Christian, an actor in Hollywood, an African American woman, beach dweller, and dog owner, if that matters. I really loved the movie War Room, and not just because it has turned me into a scripture copying, 24/7 praying fool these days, and not because it’s good “for a Christian movie,” or because it is box office gold, which really means something “in this town,” but for a few other reasons that surprised even jaded old me! - Karen Bankhead

I'm not a big fan of Christian movies, mainly because low budgets often result in bad acting and cheesy scripts that make even the most gracious churchgoers cringe in embarrassment. I can recall a couple of times where I slept off seeing some Christian movies. But, when l saw the trailer for 'war room' plus the fact that it was the stable of Kendrick brothers, my expectations rose up. I won't be surprised if War Room breaks all previous record for the Kendrick Brothers. They have outdone themselves with this one. You need to see it. In fact, you should take your friends and see it as a group.

The story revolves around a middle-class couple struggling in their marriage. Elizabeth Jordan (Priscilla Shirer) is a real- estate agent who is mad at her busy husband, Tony (T.C. Stallings), because he's stressed out and angry at her most of the time. When Elizabeth takes on the job of selling the house of an elderly woman named Miss Clara (Karen Abercrombie), she begins a remarkable spiritual journey that transforms her family.

War Room gets its title from the small closet Miss Clara uses for prayer. She challenges Elizabeth to let go of her anger, submit fully to God and begin her own prayer life. "You are a warrior," she tells her young friend. Elizabeth reluctantly cleansing out the walk-in closet in her bedroom and begins to fight for her marriage—at the same time that her husband is considering having an affair.  By the end of the film, Miss Class has not only mentored Elizabeth in prayer; she has also taught all of us why we need to go to war on our knees.

I don't know of any film that portrays the power of prayer like War Room This movie is unabashedly Christian and might as well be raped P-I for politically incorrect. There is no profanity (Miss Class does declare in one scene that the devil's butt has been kicked) and no sex—although a woman Tony meets at work invites him to her apartment. And the only violence occus when a man wielding a knife confronts Elizabeth and Miss Clara. You guessed it—the old lady rebukes her attacker in the name of Jesus.
Miss Clara's bold approach to faith is what I liked most about War Room . This brave saint doesn't care what anybody thinks—she is going to pray whether you like it or not. She gets in Elizabeth's face and confronts her bad attitudes, and she gets in the devil's face and commands him to stop destroying Elizabeth's marriage. By the end of the film she's kneeling in her new prayer room in her son's house, praying up a storm for America.
This is exactly why director Alex Kendrick says he made War Room . He told Entertainment Weekly : "This movie calls people to make prayer a priority, and we believe that it's something our culture and our nation really needs — to turn back to God and to seek him in prayer."
War Room may do more than shatter box office records. It could actually inspire a fresh movement of prayer in our prayerless nation.