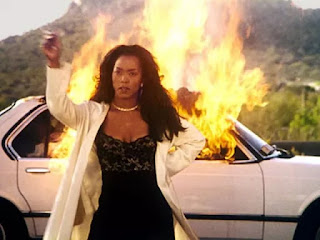 Today I nearly got a collateral slap on a bus! Yeah right, what a great way to start the day.
A man had called a woman 'erbo' during a mild argument; erbo, a derogatory bini word, which when used literally means an idol, but when applied to a fat woman -and yes, the woman was fat indeed - takes on a completely different meaning...

It means a graven image, ugly, dirty, smelly, something that lacks artistic touch directly in contrast to the beautiful works at the popular Igun street. The woman, who couldn't handle such condescension, responded - surprisingly - not with a torrent of abuse, as women generally do. She responded with action... a steaming bare faced slap that left the conductor stunned and helpless for a split second.
Then the words came finally... From the woman, of course. She was in command.
"you wan fight? Come down let's fight "the woman said in bini
" I will leave you because you are a married woman" He replied
Suddenly the bus was filled with conflicting voices
"Madam you shouldn't have slapped him" someone said
Why would he call her that? Another asked
And there l was quiet, trying to process all that had just happened while silently thanking God l missed the slap by few inches.