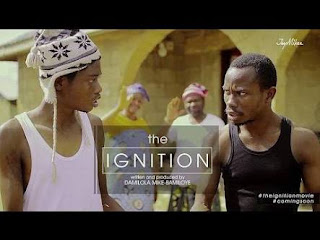 In  the Nigerian  Movie  Industry, there  is a cliché  that every Christian  movie is “Mount  Zion  Films Production”,  but  that fallacy would soon  be something to be glad about  even  if no movie can  fully explore  a subject.

Some time ago I  was opportuned to watch  what I  term  the “Best Produced” Mount  Zion  Movie I have watched in  a  while: “THE IGNITION”.
STORYLINE: The Ignition  the story  of a  Christian  bachelor  with a faulty  car,  Shola (Damilola  MikeBamiloye)   who  falls in love and gets engaged  with Ngozi (Chioma  Nwangwu) an  epileptic Christian sister  of a different tribe.  It was a smooth ride  until her  ailment becomes  the constant  potholes he has to endure  while friends and public opinions are  bumps that come  against  his faith and convictions.

Genre:  Drama, Comedy, Christian
Directed By: Joseph  Yemi Adepoju
Written and  Produced By: Damilola  Mike-Bamiloye
Director of Photography and Sound: Joshua Mike-Bamiloye
Edited: Kunle Odekunle
Executive  Producers: Mike and Gloria Bamiloye
Runtime:  1 hr. 53  min.
PRODUCTION: Mount  Zion  Films Production.
AS A  CHRISTIAN:  I  was  pleased  with  the fact that  we could come
from a  different  perspective with respect to storytelling and we could fill the void  that  that exist in  the industry  as regards relationship and not  be silent  about  what affects  virtually most singles and married  couples. I was glad  that MZFP could step  the bars  higher  and  giving Christian  writers,  film makers  and actors the motivation  to  look up  to  excellence as a  culture. I can’t go without  noting the fact that Mike and Gloria Bamiloye have done  a great  job  grooming  their children to  be professionals of  higher standards in this generation. It  goes  a long way  to  show  posterity and futuristic  projection.

As a  LOVER  OF  GOOD  MOVIES:  I  was really impressed by the production,  scene arrangement  for the sake  of  suspense and funny  lines and  acts,  use of  casts,  subtitles and translations were perfect,  picture quality,  lights, and soundtrack background music and  of importance  was  the fact that the story  line was funny without  losing content  or  going  draggy,  there was  beauty  in  the simplicity  of  the cover  photo and when  you  watch  it, you  will see how the  name is a perfect embodiment  of  the  movie. It was really funny.  I laughed a lot…  I  also  had some emotional time  too.

AS A  CRITIQUE:  I  think  MZFP should change their  intro. It can  be better. The scene at  Alfred’s  (Damola  Salako) house, where Wilson (Richard Omidiwura) got news that  his house was on  fire:  Edit in and reality  of story  was  too  plastic. First it was “Channel TV”s on the screen,  then  a call  after their  discussion,  then  a switch  in newscaster voice  and this time a news station  on  TV without  a Logo? The borders of  the munched  Video  placed on the screen didn’t  fit into  the screen  of the TV properly and the camera  wasn’t static  so it was easy for  a critic to  easily see the  flaw  in  the editing. He would have just  gotten  a  call or  simply done  a breaking news rollover on  screen…  it was unrealistic  for a Nigerian  TV Station  to  stop a  scheduled program just to show  a fire incident  live, as if  they  knew there was going to be a fire outbreak.
The next scene (Work  Place) was also  too  unrealistic: How can your  house be  razed  by fire  totally by “your wife”  and you  will be at work next  day? Who does that? Considering  the emotional trauma you  should be going through  even  for  your child. And where did he  even  get  the  cloth  to come out  the  next  day? Anyway, Dry-Cleaners  help us  save some shirts I assume.

Ngozi’s brothers  (Father  Pentecost and Emmanuel Nwabueze) should have done better with  their  use of the Igbo  language;  they weren’t  so convincing… aside her father  (Mike  Arubuike) who really portrayed  what an Igbo  man looks like. I must  also  ask what  they are  doing  in the village. Their dressing  in as much as  they want to portray  Igbo, which has been  done through  the sound track should at least  be  recent.  It’s just  like  having ladies tie wrapper  around their waist  and breast nowadays.

After the breakup between  Shola and Ngozi, The time frame  wasn’t indicated for  us to  know  how  long it took her  to move on. And the getting back  together  of  Wilson  and his Wife I  think should not have been  on  the phone. I have some issues I  term “personal”  and would need  some  reasons and  answers to: Daniel  (Kayode Babalola) said “when  I  saw  her,  I knew  she was  the  one”.

So the question  becomes: Is  there  ”A one”?  Or  is there “The One”?  In the issue of marriage and I ”Personally”  think marriage is a “choice” affair  and that  the only  thing you  must make  sure  of is that the person  is  born again… any other  thing is the person ' choice. And I am not  also  questioning  God’s power  to heal,  but how  logical is  it  for  a pastor to advice  someone   to  marry an epileptic  hinging it  on  the fact that  he  married an  S.S (Sickle Cell) Patient.

Like I said, no  movie can  fully explore  a  subject,  that’s why there is always  a benchmark of excellence to reach  and a hurdle of expertise  to  surmount.   It  was  a beautiful movie; I  laughed, learnt,  got ministered  to  and had  a great time even  as  I wait for my own  relationship,  I hope she finds me…  or  I  find her…  (you need  to  see  me  smiling) You  should also check it  out too…
©Egwu Nnanna