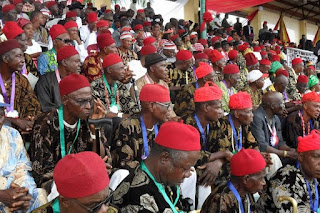 Some traditional cultures and customs are long overdue for dumping. They've become thoughtless routines that do little or no good but much harm. They may have been relevant at some time but in the light of social evolution there's such a thing as "new realities"- people should adapt customs.

I have a very industrious young friend called Obinna. He has a small electronic shop in PH. Since about 2004 when he served a master as an apprentice till when he got on his own, he's had to pause his schooling just because of lack of support and used his earnings to sponsor his younger siblings instead. About a year ago, he's aged father had to come join him and the siblings he's training at his PH residence because of health issues. I saw him like twice or so.

All the while the man was sick, no one person from the village came or called or aided in the payment of Hospital bills during numerous treatments and check ups.

Finally, the man dies. Then, quite miraculously, out of thin air appears "elders and custodians of custom" with lists of senseless obligations like 1 cow, crates of malt drink, etc that is required of him before the burial rites must proceed. Shouldn't they be shot?

Some cultures in other parts of the world pose a practice that raises funds for the bereaved in some way (e.g the Phillipines). Rather than milking them in their hour of need and grief, they should be helped!

Last night, I stopped by this my friend's shop and spoke with him, he sounded so overwhelmed as he spoke on the developments. His little financial build of the past 5 years will have to sink now into this burial. How sad!

You hear about a land dispute between two parties and one person dies, incidentally along the line, and the other party must be called to swear before idols and undergo barbaric stipulates. Cultures are not enshrined in constitutions, if not I would have said for us to start moving or campaigning for a change of such ridiculous practices. Be that as it may, individually we can start thinking differently in our sphere and influencing others to think right. All our practices are not wrong; African custom of respect to elders amongst many others, should be fostered and encouraged!

If I were Obinna, when those men showed up to collect their robbery loot, I would get some real badass, like Wesley Snipes' Blade to show them their place ASAP!

Your comments are like butter to my bread.. Pleeeaaassssseeee