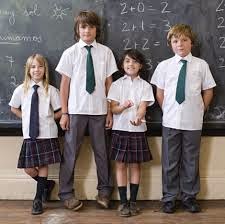 Within two days of my resumption, five of my friends had already asked "hope you came with your White and Ash?". I had no choice but to go dig out my white/it was white/cream shirts I had and a couple of ash n somehow ash skirts.

Fully claded in my school uniform I set out on monday morning to Marlima where my 7:30am class was holding. Unfortunately, I was late so imagine the nostalgic feeling I had when I tip toed into class and suddenly wished for maureen my secondary school seat mate.
Immediately I sat down, impulsively I reached for the buckle of my sandals so I can adjust my socks and realized,oh!!! I'm wearing flats and in a professional environment.

As the Lecturer continued with his definition of (Seriously, I can't remember). My thoughts drift to the day the class rep will start writing down names of noise makers or collect names for those wey speak pidgin. I stiffled a laugh when the guy behind me asked his friend " guy una bang table greet the lecturer good morning as him enter?"

Quite frankly I've had enough of uniforms. "Take the sweater off.", "Button it up." Seriously? If it's 90 degrees in the classroom and our poor school can't afford air conditioning, don't tell us to put our uniforms on. If it's 20 degrees, and we are freezing, don't tell us to take the sweaters off. Aside the White and Ash craze, its comforting when the girls/boys steps out in blazing white,it was white.creamy white or whatever shades of white and still look stunning.

Officially, we are back to school and with this new trend of wearing uniforms  there would be lots of funny moments in school. Wanna know more? I'll tell u tomorrow. Let's go to class.