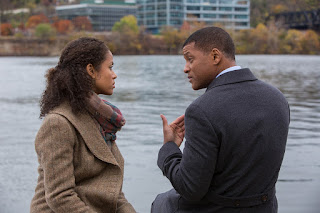 Whatever I see or read online, I take with a pinch of salt. This is because some people have the same three point agenda as the devil: to steal, kill and destroy.
The first time I read a movie review online it was about ‘Chimamanda’s Half of a yellow sun’. I did not see that movie until a year later because of the negative reviews
and when I eventually did, this was after I read the book twice, I just couldn’t get enough of it. Do people even realize that when you a movie is directed based on a book, it is not cloning? There’s something called POETIC LICENSE.

Few months ago the movie ‘CONCUSSION’ was all over the internet. The movie,details the life of Dr Omalu (Will Smith) a forensic pathologist who discovers a neurological disease while performing an autopsy. He was threatened, harassed and went through a lot but he came out strong.
All through the movie I kept uttering WOW!!!!! As many times as possible because I was blown away by the story line and the accent which Nigerians complained about, was the least of my concern. The punch lines were beyond amazing. The first statement that got me glued to my screen was when Dr Omalu replied his superior and said “ would you want me to cut your mother with the same knife I used on a serial killer”? then somewhere along the movie he said “ God never intended for man to play football”.
The romance? It wasn’t all mushy smoochy but it was filled with respect, thoughtfulness and tender love.
My take? Will smith did an excellent job but world people will say differently…abi no be so? The story line is dope.
The cast? Dope.
The music? Dope
Everything? Dope.
So Will Smith where do I send my kisses to?


Sorry for the misleading heading phavourites;but if you haven’t seen that movie yet,you should.