In the movie "courageous "four fathers protect and serve their community with great confidence and focus but when faced at the end of the day with their biggest challenge " fatherhood " they turned yellow.

There is an epidemic going on in society, and it can be summed up in one word - fatherlessness. So many boys grow up to be men who lack an understanding of what it really means to be a man because they were never shown how. Children need their fathers and when men neglect their role as caretakers, leaders, providers and co-labourers with the mothers of their children, it causes a serious deficiency in a child's development. Fathers are the foundation of the family itself and essential for generational continuity.  Without them, the family structure suffers resulting in a variety of problems.

Fatherlessness impacts how societies operate. Children who grew up without their fathers or a significant male figure often end up seeking fatherly approval in their relationships. For boys who grew up with an absent father, the impact can greatly affect the path they choose in life. Facts and impacts of children who have no father figure in their life have been given as:
1. Children who were being raised without fathers have 5 times probability of being poor.
2. Babies mortality rate who were born by an unmarried mother is 1.8 times higher than the married mother.
3. Teens raised without fathers has bigger probability to be involved in crime.
4. Teenagers raised by mothers have higher risk to involve in pre- marital sex.
5. Living with a single parent has doubled the risk of children to suffer from physical and emotional under development rather than those who live with both parents.

Fatherhood is not a choice for man; it is inherent.A man carries the seed from which all life comes, and whether he has a child or not he will always have the built- in- need to father someone. The only way you can effectively destroy a building is by wrecking its foundation, and the foundation of mankind is the male- man
So if the foundation is faulty, the rest of the house will come tumbling down.

It was Charles Wadsworth that said "by the time a man realizes that maybe his father was right, he usually has a son who thinks he is wrong.

Finally the best example you can get as a father is from God. Have a splendid day y'all 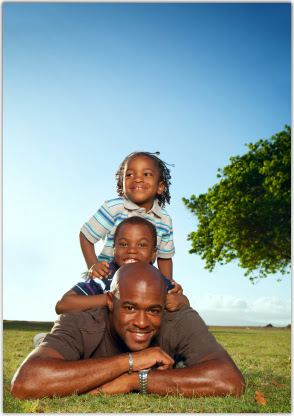