When everything’s seemingly going great with a guy and then he totally drops off the radar? Yeah, that.A couple of months ago I met a guy on instagram. He was good looking, smart and seemed to have his shit together. Anyway, after a few days talking, we met up for ice cream and I was relieved to find he was better looking in person and was also very tall – thank God. I hate it when you meet up with a guy and they have the height of M.I Then he asked me out to dinner at a fancy restaurant. It was the best date I’d been on in ages - great food, great flanter, lots of laughing and no criminal records.
Tick. And the best bit was when we kissed goodnight, I had that rush of excitement like you’ve just eaten a whole bag of KFC Chicken and chips.

Over the next few weeks, we hung out more – going to the movies, the beach and out for lazy Sunday clubbing. The more I got to know him, the more I started liking him. I even told my friends I had a crush.But then I texted him, asking him if he wanted to meet up on the weekend, and it’s been  SEVEN days and he still hasn’t answered.
I think he’s ghosted…
Ghosting: adj: when a male human has been courting a female human and disappears into thin air with no reason or explanation. But make no mistake, you have been dumped. See also: smoke bomb; Pink Panther.

Have you been ghosted? HOW BAD IS IT?! It is literally THE WORST. When you’re dumped the good ol’ regular way, you’re gutted, for sure. But, depending how long you were together for, you can wallow, watch 30 days in Atlanta or lekki wives or When love happens… then after a few days you can analyse what went wrong, get your besties and your heels, and get back out there.In other words, there’s a process you go through that allows you to grieve and move on. But when he disappears like Harold Holt with no clues as to why, there’s no process – only an emotional rollercoaster. For the last seven days, every time my phone’s buzzed I’ve been filled with hope and excitement and butterflies – this might be him…Finally! Then when I see it’s just MTN  telling me why I need to have Tiwa Savage and Waje's  "my baby" as a caller tune, the disappointment punches me hard, right in the pit of my stomach.

I’ve gone through every detail thinking I’d done something to offend him or I’d been too clingy. I’ve made up every excuse in the book to explain away his lack of communication – maybe he’s been called away on urgent work business? Maybe his phone got stolen? Maybe tiny dwarves broke into his apartment and cut off his fingers with teeny tiny saws? And it’s driving me nuts! But really, I know I’m just avoiding the truth of the situation – he’s not into me, so much so that he can’t even be bothered to let me know. And that’s the real kicker with being ghosted – I hate that I’m spending so much time thinking about a guy who is thinking of me even less than he does his great aunt, twice removed.

I wish my mind was stronger than that. I’m trying though, and any time a thought of him creeps into my brain like a snake Slithering out of the bushes, I kill it by repeating Hulk, Hulk, Hulk in my head. I have no idea why this works, but it does. Try it if you don’t believe me. And finally, I keep reminding myself he’s moved on. Time for me to do the same. But I’m still mad. I mean seriously? Ghosting?! How weak. Man up AND TELL ME I’M DUMPED! Even if it is on a Post-It. 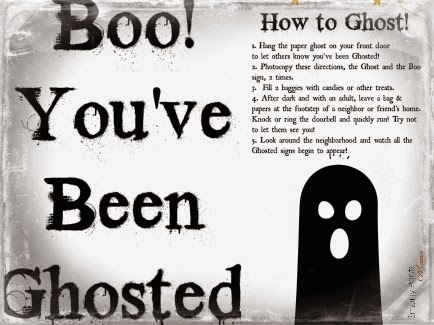