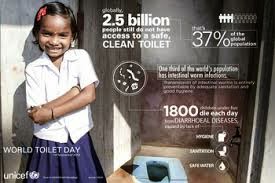 A few months  ago, oddly enough, I needed the bathroom, and I found one, a public bathroom, and I went into the stall, and I prepared to do what I'd done most of my life: use the toilet, flush the toilet, forget about the toilet. And for some reason that day, instead, I asked myself a question, and it was, where does this stuff go? And with that question, I found myself plunged into the world of sanitation --  sanitation, toilets and poop, and I have yet to emerge. And that's because it's such an enraging, yet engaging place to be.

To go back to that toilet, it wasn't a particularly fancy toilet,it wasn't as nice as the one at home. But it had a lockable door, it had privacy, it had water, it had soap, so I could wash my hands, and I did because I'm a woman and we do that.

I once saw a child doing open defecation in a popular city in Nigeria. Well, that little boy will not have washed his hands. He's barefoot. He'll run back into his house, and he will contaminate his drinking water and his food and his environment with whatever diseases he may be carrying by fecal particles that are on his fingers and feet.

Diarrhea is the second biggest killer of children worldwide, and you've probably been asked to care about things like HIV/AIDS or T.B. or measles, but diarrhea kills more children than all those three things put together. It's a very potent weapon of mass destruction. And the cost to the world is immense: 260 billion dollars lost every year on the losses to poor sanitation. I just can't explain it, we know about sanitation and diarrhoea but some peoples hygiene standards are so terrible.  Think about it. That little boy who's running back into his house, he may have a nice, clean fresh water supply, but he's got dirty hands that he's going to contaminate his water supply with.

In India now there's a campaign which persuades young brides not to marry into families that don't have a toilet. It's called "No Loo, No I Do."

Why exactly is favourmoyse  talking shit today? Oh well!!! Do you even know that poop can make your dinner? In Rwanda, they are now getting 75 percent of their cooking fuel in their prison system from the contents of prisoners' bowels. So these are a bunch of inmates in a prison in Butare. They're genocidal inmates, most of them, and they're stirring the contents of their own latrines, because if you put poop in a sealed environment, in a tank, pretty much like a stomach, then, pretty much like a stomach, it gives off gas, and you can cook with it. Have you heard of repoopulate ( a novel method of using feacal material to cure disease)

Why I don't expect my country to get here anytime soon as we are still battling with terrorist and indecisive about election dates. I do know one thing. You, me, all of us can decide to sanitize. I've watched so many kids die of diarhoea, I've had a gory experience as well.

Its simple. Wash your hands and talk shit.