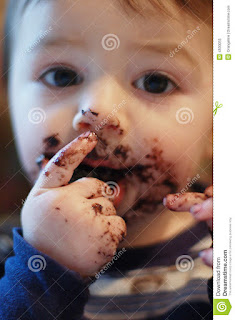 There’s a place on Dibijo Olabesi street of where we've heard the tales of old. There was a tidy shack tucked in a corner, which provided its goers with pleasures untold. As a matter of fact it needed no telling, for the people who came from far and wide. Of the taste that would envelope them yet leave them yearning, that could make men scoff at or forsake that of their brides.

Now you shouldn't misunderstand me, take your mind out of the gutter. The tidy shack I speak about was not a house for slaughter. Well not in the prurient sense anyway, for I can count the goats and the chickens. Their bone heads in the dustbin just behind it, from which the crows keenly gobbled their pickings. There also, huddled a few feet away, were some folks with their distended bellies. Just at slight distance beside it did they give their freed bowels sway; the stuff from their entrails forming all manners of pastes, jams and jellies.

The tidy shack of lore was owned and run by a skilful witch. Iya Ibeji with her fufu; her irresistable dish. No, her comers did not mind, but in fact were very kind, to make known to anyone who would want, that this lady’s mealie indeed held no taunt. That it was very safe to roll, between the palms till you let it go. Dipped in a soup of oil and vegetables. Steeped in sauce and all the pleasurables. Rolled ponmo, kanda and pieces of towel. Sometimes tongue, sometimes skin, sometimes obtained from the bowel. The whole of a goat head dish or the half of it. Sea fish, fresh fish, even the dog and cat of it. A sea of variety of the soups and the stews – yes, with mixing if you’d like it, but that’s if you so choose – Extra could be asked for, of course at added price. And this warranted that no one ever asked her for rice. Her rice was in no way bad, but it made many a man sad, that when after a few footsteps the fullness of the meal would be gone as if sets of overactive tapeworms had snatched up the goodies, and afterwards in joy had begun freestyle rapping among themselves whilst wearing facecaps and hoodies.

There is a place on Dibijo Olabesi street of where we've heard the tales of old. There was a tidy shack tucked in a corner which provided its goers with pleasures untold. As a matter of fact it needed no telling, for the people who came from far and wide. Of the taste that would envelope you yet leave you yearning, one that could cause a doubt for whose loyalty; Iya Ibeji’s and your bride’s?