24 WORDS FROM 2015 ELECTIONS, AND MY RIDICULOUS MEANINGS FROM THEM.

This is a sponsored submission from 360talkatives blog.
To DURU CHIMEZIE, a Political Party Logo is "any household items and furniture like brooms, umbrella, sofa, center-table, rug, etc". Here are the other 23 meanings he has given words and items from the 2015 elections. You'd really enjoy this. 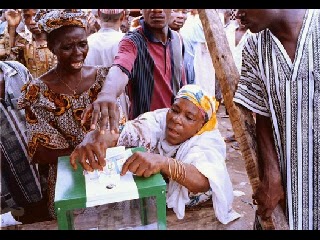 Last week, we were adequately drunk with good ‘nonsenseness’ even though it was really fun, judging by the Whatsapp and text messages I got from readers (still wondering if placing comments on a blog is some sort of poisoned chalice, though). However, this week, I have chosen to feel that we could be a little bit saner and aware of what’s going on around us (being nonsense is equivalent to sitting in a lonely room and covering yourself up in four thick blankets and not knowing where you are). We can now address our immediate problems and make good noise about more useful things. Thus, I came up with this title. But I am grateful to my readers, for taking the time to read the two submissions after all.

So it’s election year (you must be living under a rock if you are only getting to know that now), and we have already been burnt to the marrow by the electioneering and politicking. The campaigns have been intense and people like myself have barely survived ear-drum damage arising from all manner of campaign jingles and slogans. Our ears are actually very full now. But how about the vocabulary we are served day in, day out? (Did I just say served? They are actually rather shoved into our mouths). I easily felt it could make for good reading. So after sitting down and doing some compiling, here are the most popular words I got to hear in this year’s election period. I also did you guys a favour by doing my best to add their meanings to them albeit some being rather….well, pointless. Here we go, still:

2015 ELECTION WORDS AND THEIR (RATHER SENSELESS) MEANINGS.
By Banter Without Doors

1. Asari Dokubo: (verb),
The act of threatening to war everybody if you lost in a cause.
(Application): “He asari-dokuboed us when he heard he might have failed the exam”

2. Chibuike Amaechi: (verb),
The act of being rewarded with the position of Campaign Chairman when you fail to secure that of the running mate.
(Application): “He promised to chibuike-amaechi me if I could support his trip to Qatar”

3. Okupe: (verb),
The act of lying for no reason.
(Application): “I know Douglas enough. He simply okupes even when not necessary”

4. FeBUHARI: (noun),
A new month of the calendar year.
(Application): “I wish to apply for the screening exam on the 41st day of Febuhari. That will make my trip a lot more possible”

5. Boko Haram: (noun),
Any reason that can be given for postponing an election.
(Application): “Can we create a ‘boko haram’ situation? Because I don't see this elections holding.”

6. Election-Postponement: (verb),
The act of fighting Boko Haram in six-weeks.
(Application): “Reports say that the Ghanaian president and their military have an election-postponement plan to fight ISIS in Ghana?”

7. Party Logo: (noun),
Any household items and furniture like brooms, umbrella, sofa, center-table, rug, etc
(Application): “Please Michael, get the party logo and sweep this room for me. I am sleepy.”

9. Campaign: (verb),
The act of washing your opponents dirty-linen in public, while calling them clueless and old.
(Application): “He campaigned me just because I am 80 years old”

10. INEC Chairman: (noun),
Any person, animal, place, thing, or object that you can blame once you lose an election.
(Application): “Plateau state was a bad INEC Chairman, we would have won if they had voted for us.”

11. Machinery: (noun)
A human-machine whose sole life-purpose is to rig elections.
(Application): “I will be hiring a new machinery for the coming elections. I have already bought and stored enough diesel”

12. Political Structure: (noun)
A very huge machine made up of human beings and with the task of helping the government in power to get back to power.
(Application): “He said the governor intends to take his political structure to a mechanical engineer for maintenance service”

13. Propaganda: (noun)
Anything bad but true that is being said about your candidate or party by your opponents.
(Application): “Even though N2000 is missing under my office, it is simple propaganda when they tell the public”

14. PVC: (noun)
INEC’s most favourite English word.
(Application): “We will try to make the PVC’s available before the PVC deadline so that the PVC machines can accept the PVCs from voters with their PVCs”

15. Old: (noun)
Anybody in the opposition you don’t like but see as a threat.
(Application): “He is more popular than me. But he is too old to win me”

16: Endorsement: (verb)
What you tell any politician you hope to gain material benefits from in future, once they visit you for support.
(Application): “I am going to endorse you for governorship. But always remember that I have interests in oil fields”

17: Political Party: (noun)
Any group of people that will willingly allow themselves to be fooled by you so as to have you in power.
(Application): “It's a pity you just have barely 80 million left in your account and cannot continue the campaign. Anyways what if I give you my last card, which is 3 million? Will you continue? 'Cos I really want you to win”

18: Political Party 2: (noun)
Any gathering of 6 to 8 people, hopping around with poorly-printed flyers and hoping to secure some funds from INEC.
(Application): “Can we form a political party? I need funds for a new car”

19: Presidential Candidate: (noun)
Anybody who is contesting for the Presidency but is less popular than his/her Local Government Chairman.
(Application): “I was trying to introduce Mr. Ojo, the presidential candidate, to residents of his street. Just 2 out the 12 of them knew he lived in the street”

20. Corruption: (verb),
The act of not stealing.
(Application): “Our Pastor corruptions money”

21: Election Campaign Trail: (verb)
The act of roller-coasting through the 36 states and the FCT - picking up 271 traditional chieftaincy titles in the process.
(Application): “We will election-campaign-trail before the end of March as I think I need a new set of traditional titles ”

22: Campaign Promise: (noun)
That big fat blue lie you tell us of which we know is a big fat lie but yet still cheer and hail you in a big fat way.
(Application): “He told us he will buy every Nigerian a car. I simply loved how he used his campaign promise. I will vote for him”

23: Party Decamping: (verb)
The act of simply cancelling your name behind your class exercise book and writing that of your enemies over it.
(Application): “I cannot party-decamp anymore - my exercise books are finished”

24: Twitter: (noun)
An electronic Nigerian Elections Tribunal.
(Application): “The governor's victory is questionable since they gave him victory on twitter even before the elections”

These were the 24 I could actually muster, now can you guys increase the list? The word, the meaning and the application of the word. I will be waiting to receive them here.

All the same, hope you enjoyed the ones I compiled? I drop my pen now. See you guys next week!

You can read more articles like this from Duru Chimezie, on 360talkatives by clicking here.

Banter without doors is a sponsored article that comes up every fridays. Don't miss it for anything in the world.

Email ThisBlogThis!Share to TwitterShare to FacebookShare to Pinterest
Labels: BANTER WITHOUT DOORS